Considering that I had followed all this steps https://flutter.dev/docs/get-started/install/linux in my Ubuntu 18.04LTS, why this following problem continues to appear:

Does someone know why? I've made many searches in my files, I have only one Android Studio installed. Why displays two? What "[!] Android Studio" refer to? Does command "$ flutter doctor" have a problem?

This can be solved in simple steps:

You will see a list of plugins related to flutter. Click on the first one and check which version it is. Currently, the latest version is 37.1.1.

Step 6: Click on install. (It may ask you to install dart plugin also. Hit yes and android studio will install dart and flutter for you)

This post is for those who have gotten the plug-ins installed but still receive the warning.

Note: The Flutter team has created an issue for the inability of doctor to detect installed plug-ins. It's a know issue and they are looking to deprecate this detection feature of doctor:

My flutter and dart plug-ins are correctly installed but I still get the warning.

In my case ignoring the warning worked fine.

I tried re-installing plug-ins several times but that did not remove the warning from flutter doctor.

However, everything works fine. I can successfully create and run apps created from

I installed flutter via the snap store:

FYI, it took me a while to understand where the Flutter SDK was located. It is here: /home/(username)/snap/flutter/common/flutter 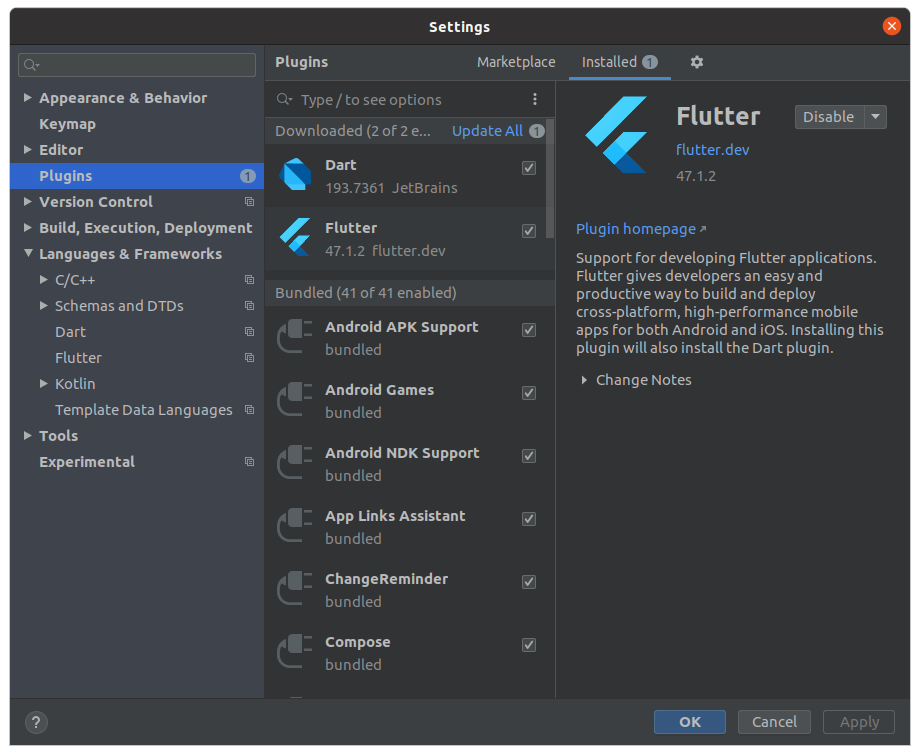 I recently encountered this problem, I first tried to update the flutter and dart plugin from the android studio market place, but that did not work

Finally, I run the following command and it worked like a charm