I have a multipart request I'm trying to send from my Flutter app to my remote Lumen/Apache server. This code was working fine when I was hosting my Lumen server in Homestead locally, which runs nginx.

The Lumen server itself responds accurately when sending the request via Postman. I doubt the Flutter application is sending nothing at all, as it was working before the server move. Since it's not the Lumen app, as it works with Postman, then I presume it has something to do with apache.

The header I set, using http.MultipartRequest() is (in Postman I used form-data):

I also have an Authorization Bearer: token header which works fine, as the app would've presented an Unauthorized response before running the route.

I have the following code:

I get the following output in debug:

In my Lumen application, I have a function that simply does:

I get the following result:

This arrived from the request not passing validation checks. Before this, I had the longer function:

And it was failing the validation tests, even though the data was apparently being sent (and it used to pass before the server move).

What could the reason be? It seems the only difference is moving from an nginx local Homestead server to a remote apache server. I thought maybe I need a different header, possibly.

With some more testing, I found that the request works without error if there is no image in the multipart/form-data request. The issue seems to rely on there being a file attached. Apparently, when and only when there is a file attached, the server reports that no data was sent.

Here's the difference between Postman and http.MultipartRequest:

Again, the properly formed requests work if there is no file attached (and everything else is the same). It's when the http request has a file that it suddenly works unexpectedly.

In the last server, I could not fully test the http functionality as I was using localtunnel.js to forward requests to my phone from Homestead, but it has a file size limit that I didn't want to work with. I did know that dart's http was sending the file, however, due to the 413 Request Entity Too Large responses that didn't occur without the image.

Here's the output of the request object in Flutter's DevTools (sorry it's a picture -- it doesn't permit selecting the text): 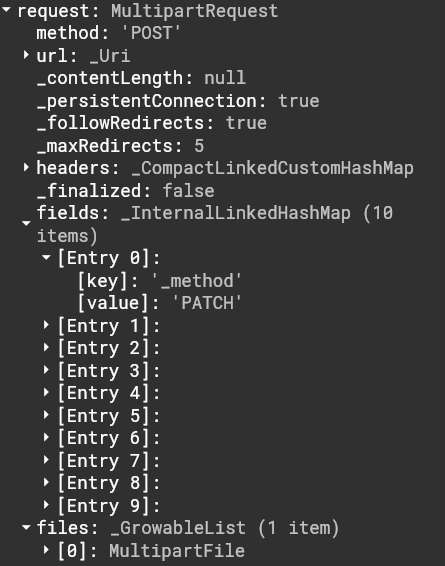 When not including a file, the request looks identical except for that files list is empty. Despite this, a request without a file is received by the server with data, while the other results in no data apparently sent.

The headers field of the request object looks fine too, with Content-Type being present. The authorization field clearly works, too, otherwise I would be getting unauthorized errors. Since the request object looks fine, something between request.send(); and the Lumen app is dropping all of the data if there is a file attached. Where it's coming from -- the Flutter app or the server -- is difficult to be sure about. (Considering the Flutter app was definitely sending something large when a file was attached when I was using localtunnel.js, it seems likely to be on the server side, as it seems the Flutter app is sending data, just the server is dropping it if there is a file. However, Postman works without hiccup, which suggests the server is functioning correctly.)

My answer was a bit early. PHP was throwing away all of the data because the file was too large. After editing php.ini for post_max_size and upload_max_filesize, the data did start making it through, and, at first, I thought that indicated it was working.

However, it turns out that while now the non-file data is making it through, and using mod_dumpio, I see that the file is being sent, when the request comes from Flutter's http.multipartRequest, the server is dropping the file, specifically. When the request comes from Postman, everything works fine. I made sure to test with the exact same image, as well, and there seems to be no difference in the requests.

Update: This answer only partially solved the issue.

Using tcpdump on the server, I found that the server is indeed receiving data (even though Lumen was saying that it was not receiving data), and the amount of data seemed to correspond with whether a file is attached or not. From this, it seemed the problem was occurring with Apache, PHP, or Lumen.

I also enabled mod_dumpio, and tested the requests with and without a file and both appear to send data normally. The file request was clearly sending a large amount more, and the Content-Length reported seemed accurate, even though Lumen was reporting no data.

Sorting through error.log I did find the error, however. It was just that PHP was dropping the data because it exceeded the post_max_size size of 8MB. Once editing php.ini for that and upload_max_filesize, the application worked fine.

What's funny is that's usually the first error that occurs with file uploads and PHP servers, so it's weird I didn't suspect it. It would be nice if PHP issued a 413 Response by default.

Recently I was working with sending MultipartFile to our server on MongoDB/HapiJS server. While it worked in postman and with vue web app, I struggled on Flutter to find out why it didn't work. In our case the solution was rather silly, but it worked: When sending the file I used MultipartFile.fromBytes(byteData), and after changing it to MultipartFile.fromFile(filePath) it worked.

Could you check this (or other way around) and tell if it works?